​Las Vegas, Aug. 17, 2022:  Earlier last month, slot manufacturer Gaming Arts launched a very unique new slot game, Brian Christopher's Pop'N Pays More!™. Besides great game play, what makes this slot game so unique is that Gaming Arts has partnered with Brian Christopher, America's no. 1 slot influencer, to design this new game from the ground up that revolves around Brian Christopher, complete with many fun and exciting animations, voice overs and much, much more!​ 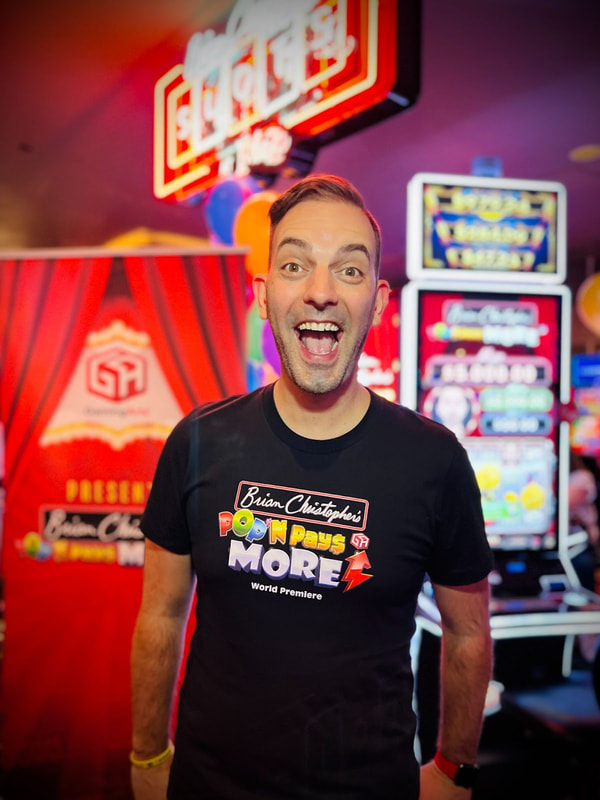 In the coming months, Gaming Arts will continue installing the new Brian Christopher game along with adding the other new Pop'N Pays More! games, Piñatas Olé and Big Top, across the rest of the country. To date, the response to Brian Christopher's Pop'N Pays More!™ has been outstanding with performance numbers in many cases, consistently running more than 4X house average.

For many of these locations, Brian has made appearances with live streaming videos, hosting group pulls and free slot pulls, along with the unique opportunity for fans to meet with Brian and take photos. The reception by Brian's fans has been astonishing with wait times up to several hours and with lines over 300 people long, all done happily by his legion of followers!

The Brian Christopher game with 1,047-ways-to-win, has a feature that very often expands reels 2-5 up to eight symbols high. At full expansion, there are 16,384 ways to win on every spin. In addition, there is a rapid free game feature offering up to 15 free games with frequent re-triggers. For added entertainment, throughout game play, Brian Christopher's avatar pops up as cash-on-reels symbols, uttering his most popular catch phrases including: "Oh Nelly!" after a big win, "Line it UP!" in anticipation of a winning spin and other favorites including "Do it to it!", "It's all about timing!" and "Rude" where a symbol lands just short of a combination!

The collaboration between Brian Christopher and Gaming Arts is a natural fit as Gaming Arts is a supremely inventive slot company with an understanding and appreciation for how the rapidly evolving social media will influence gaming in the years to come. Gaming Arts has proven itself as a top industry innovator with a long list of successful slots, including the extremely popular Kung Fu Empress™ and the world's most advanced electronic table games (ETGs), Casino Wizard™, as well as the soon to be released Casino Wizard VIP™.

Brian Christopher's more than 5 million monthly viewers on social media have received this first-of-its-kind partnership with open arms. Brian and the Gaming Arts design team delivered a game loaded with features appealing to both superfans and general slot players alike. This winning formula has earned rave reviews and generated unprecedented interest among players. They are not only coming out to the casino properties that have installed the game to date, but they are also asking their local casinos to add it to their gaming floors!

Jean Venneman, Chief Operating Officer of Gaming Arts commented, "We're really excited to be working with Brian," Venneman continued, "He's been an amazing partner to collaborate with, and we're confident that his fans and players alike will really enjoy this exciting new game."

Brian Christopher added, "We're a perfect match. We are both super innovative and forward thinking. As my fans already loved the original Pop'N Pays games with their constant action, fun bonuses, free games and catchy music, Gaming Arts was the obvious choice to partner with."

About Brian Christopher Slots
Brian Christopher is the leading influencer in the casino gaming world. He publishes daily videos playing slots in casinos and online, showing millions of fans how to have a great time using an entertainment budget. His content excites and educates the most vibrant, deeply engaged, and demographically diverse community of gaming enthusiasts. To learn more, please visit BCSlots.com and @bcslots on YouTube, Facebook, Instagram and TikTok.